On the golf course since she was 6 years old, thanks to parents who passed on the passion, her father, Luca Flori has always been her teacher and guide, her mother Elena Marchetti, also on the circuit, has always encouraged her to go down the professional route. 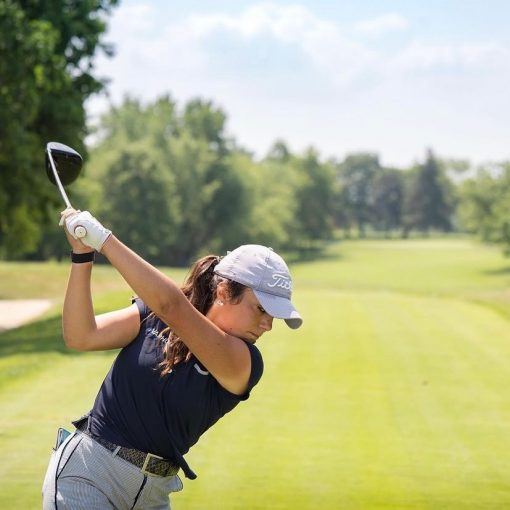 After returning in 2019 from the United States with a degree in marketing and communication, obtained at the University of Mississippi, and victory with the “Ole Miss” team in the SE Conference, the most important competition among university teams in the southeast of the United States, Martina Flori did not devote herself much to golf. She obtained a Master’s degree at Polimoda in Florence in fashion marketing and communication and then worked for a year in Milan at Golf’us (a golf clothing and accessories company) in a digital marketing team.
But office work was not for Martina, who decided to return to playing golf, this time with a goal: to become a professional. After a 2020 that forced her to stop again due to the Covid emergency, in 2021 she resumed playing golf seriously.

In July 2021, the possibility of landing on the Ladies European Tour became concrete when the golfer from Montecatini (among the best Italian players at a youth level and several times a main character seen in the National Team shirt) made the cut to the Lausanne tournament of Let Access, the minor European circuit.

“I got an invitation and took advantage of it. I saw that the level of play was within my reach and I worked even harder. Since August I have been training full time in Montecatini and in October I played another Let Access tournament in Barcelona. Then, at the beginning of December, I participated in the national gathering of professionals in Sutri and I was followed by all the blue staff and in particular by Roberto Zappa” – says Martina.

The following week Martina participated in the prequalification of the Let Q-School, in Cartagena, Spain, and after 3 rounds finished in 67th place with a total of +11, acquiring the right to participate in the Ladies European Tour.

From February 2022 Martina has made her debut as a professional with a calendar that takes her around Europe from May to end in Paris at the end of October.

Fabo decided to support Martina as a sponsor during her 2022 tournament calendar.

Below is the calendar of the 2022 tournaments in which Martina has participated and will participate:

Congratulations on the successes achieved and good luck from Fabo for the challenges ahead!